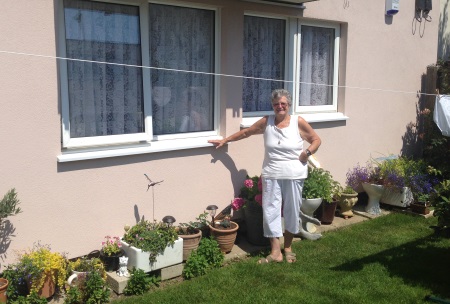 Householders from the Rowner Estate in Gosport have spoken of the benefits they have experienced since taking part in a community wide regeneration project.

Hundreds of homes have been visually transformed and made energy efficient through whole house insulation upgrades.

Evelyn Finn, who has lived in Rowner for 50 years, said the project has already made a big difference to the area. She explained:

"The buildings looks so much better. It looks so much cleaner and tidier now from the outside. I live in an end terrace and the two rooms at the far side of the house used to get so cold, but I’ve now noticed a distinct difference since the work was carried out. It’s a lot warmer now."

Dubbed by locals as the ‘Concrete Jungle,’ the Rowner Estate is renowned for its high rise tower blocks. Many of the buildings were in a bad state of repair with poor thermal standards, leaving the residents paying over the odds on their fuel bills.

The regeneration scheme is designed to make homes warmer, healthier and cheaper to heat whilst enhancing the look and feel of the community.

Farther of three, Steven Christie is looking forward to saving money on his energy bills since insulation was fitted to his flat:

"With three kids it’s important to keep your home warm, but it can be expensive. We were easily paying around £40 a week just on electric during the winter months. But the insulation should help us keep on top of it now.

"Around the estate a lot of the flats did look a bit worse for wear and there were a lot of damp issues.  I took some plasterboard off in my flat and it had a big bow in it from all of the moisture.

"It’s good that this project is happening. These kind of schemes will help a lot of people. By keeping the house warm and keeping the damp issues out, there’s less chance of our kids getting ill."

Over 200 apartments in 14 blocks of flats and maisonettes are being made more energy efficient.

The project is supported by a number of funding avenues, including money awarded to Gosport Borough Council through the Government’s Green Deal Communities Fund.

"The Rowner regeneration project has been a great achievement and something OVO has been very proud to support. It shows how effective partnership working can really make a difference at a community level, helping to reduce fuel poverty and benefiting those residents who most need support."

"From just walking around the area it’s clear to see the impact the project has had on local residents. The scheme is a great example of what can be achieved when different organisations come together and blend different funding streams. We hope that the scheme will help influence similar projects across Hampshire and the rest of the UK."

The Rowner regeneration project has also helped boost the local economy, as all the construction work has been completed by Gosport based installers, Wall Coatings Ltd.

The final phase of installations is now underway and the project is scheduled to complete in September.

Find out more about the Rowner Regeneration Scheme.