Why there has never been a better time to go solar 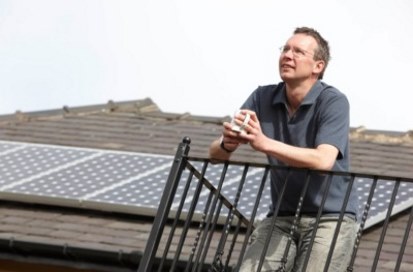 Huge rises in energy costs are hitting households hard, while the price of solar panels continues to fall. Making the switch now means saving more money than ever.

Winter is coming, and with it possibly another round of price hikes for domestic gas and electricity. As living costs rise faster than wages, the burden of even more expensive energy will force many families to compromise. Yet there is a solution.

Solar technology has been around for years. You’ve probably seen it – arrangements of panels fixed to roofs that turn sunlight into electricity. For a long time, these systems were beyond financial reach for many households. But falling costs, improved technology, government incentives and greater competition between manufacturers has made solar panels more affordable than they’ve ever been.

And the price was predicted to drop by a further 40% by the end of 2017. What at first seems like a large outlay actually pays for itself over a shorter period and gives you a greater return on your investment. Using electricity you produce yourself means you’re less in thrall to the big energy suppliers and their spiralling prices.

In 2007, the average home was billed £415 for its yearly electricity. This was quite a rise, given that the price of electricity had been in decline up to 2004, when households were paying only £288 for their annual supply. Fast-forward to late 2017, and all of the UK’s largest energy providers (E.ON, Scottish Power, SSE, EDF and British Gas) have implemented increases that drive yearly prices well over £600.

Further price hikes are likely unless wholesale prices begin to drop. The UK buys much of its electricity from other countries (such as France and Germany) and the cost of doing that has risen, even more so after the Brexit vote and the pound’s fall in value. A particularly harsh winter of higher demand and potential power outages could also have an impact on prices.

Meanwhile, solar panels have continued to decrease in cost, giving the owners a better financial return. The Government runs a scheme called the Feed-in Tariff, which is designed to encourage people to switch to solar energy and other renewable sources. You register for the scheme and receive payments from your energy provider for the electricity you generate over 20 years.

Whatever electricity you don’t use, you sell back to the grid. And having your own supply means you buy less from your energy provider, which reduces your bills significantly. According to the Energy Saving Trust, residents using solar panels in an average semi-detached property could save £70 a year on their electricity bill, on top of the money generated through the Feed-in Tariff (currently around £200 annually for most parts of the UK).

Busting the myths about solar energy

YES Energy Solutions conducted a survey asking homeowners why they hadn’t yet invested in solar panels. Of the people surveyed, 55% said it was the high cost that put them off.

There is still a misconception that installing a solar system is affordable only to the most affluent people. While this might have been true in the early days – when systems were being sold for five-figure sums – it’s no longer the case. The price of solar panels has plummeted over the last decade and that downward trend is forecast to continue.

Because the technology has advanced and become cheaper to make, a system that cost £15,000 in 2010 can now be sold for between £5,000 and £8,000. As more manufacturers enter the market, production costs will fall further, which lowers the price for the customer.

Depending on where you live and the capacity and direction of your solar panels, you could see a return on your investment within 10 years through the savings and payments you receive. You’ll then continue to save on bills over the lifespan of the system and generate income for the remainder of the Feed-in Tariff period.

It isn’t available where I live

The survey found that 16% of respondents hadn’t installed solar panels out of a belief that the technology wasn’t available in their area. In fact, solar panels can be deployed anywhere in the UK, and you should be able to find an installation company (or several) in your region. However, as explained below, while location isn’t a barrier, it does play a part in how much electricity a system can generate.

It won’t work in this weather

A portion of people who responded to the survey said they had chosen not to invest in solar panels because they doubted that the technology actually worked. This seemed to stem from the belief that solar panels function only in places where the sunshine is hot and constant, and that they wouldn’t work at all in cold, grey British weather.

Because solar panels convert the sun’s light energy (‘solar irradiance’) rather than heat into electricity, normal daylight is more than sufficient, and your panels aren’t going to fail you during winter. However, solar irradiance is such that solar panels are undeniably more productive on sunny days with little cloud coverage. They also perform better during the summer when there are more daylight hours.

Other factors come into play too, such as the tilt of your roof. The Energy Saving Trust’s guidelines say that a roof facing due south and tilted at an angle of 30° will give the best overall performance. Because the sun rises in the east and sets in the west, the southern side of your house sees the most sunlight during the day. It’s why putting panels on a north-facing roof isn’t recommended, and why it’s important to make sure that there is nothing obstructing or casting shadows on your panels. 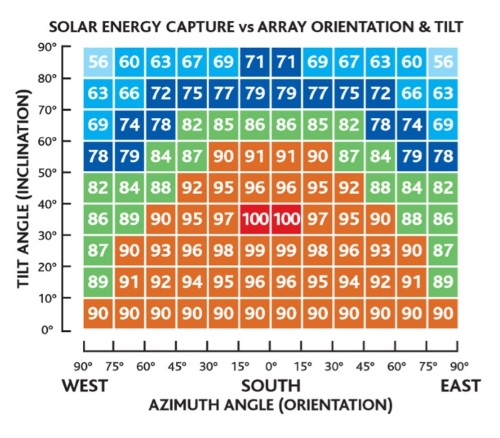 It’s not all doom and gloom in the north

The UK is 874 miles long, measured from Land’s End to John O’Groats. Obviously, across such a distance there are going to be variations in climate and the amount of daily sunlight a given location will receive. Added to the differences in solar irradiance mentioned above, it’s clear that solar panels will prove more effective in certain parts of the UK than others.

It’s well known that the south of England is the sunniest part of the UK. The south west in particular benefits from high pressure and its effect on clearing cloud cover, allowing the sun to blanket coastal areas, and places such as Eastbourne in East Sussex, which is officially the UK's sunniest city. Met Office data shows that many coastal areas in the south west have an average of 1,600 hours of sunshine each year.

As you move inland and north, the amount of sunshine falls incrementally as both the altitude and your distance from the south coast increase. You’re also travelling away from the equator, which means less of the sun’s energy is hitting that part of the Earth.

A solar system in somewhere like Eastbourne will generate around 30% more electricity than one in the Shetland Islands, for instance.

But that’s not to say you should avoid solar panels if you live in the Shetlands, or anywhere else north of East Sussex. You’ll still be generating much of your own electricity and making significant savings on your energy bills.

Let’s look at Leeds as an example:

A 4kW solar system on an average sized household with a south-facing roof could generate income and savings of £12,333* over the 20-year Feed-in Tariff programme. The panels would then continue to generate electricity and provide further savings on energy bills for many years to come, making it a worthwhile investment.

*Calculated using standard MCS methodology using the tariff period 1 October to 31 December. Assuming there is no shading and the property has an EPC of D or above. Assumptions – 50% of generated electricity is exported, RPI 2% and the resident’s current electricity tariff is £0.12 per kW.

Research conducted in 2015 demonstrated that, despite having a less favourable climate, several of the UK’s northern regions (particularly those on the eastern side) were matching the south in terms of how many solar panel systems were being installed. Solar technology has only grown in popularity since then, as the numerous benefits become more and more obvious for all to see.

An interesting map from The Eco Experts shows the areas in Great Britain with the highest solar installations: